When Did We Start Odorizing Natural Gas?

Unfortunately, the origination of odorizing natural gas has a tragic history. This year marks the 85th anniversary of the March 18, 1937 New London School disaster which occurred when an undetected natural gas leak caused a huge explosion. The explosion destroyed the school and killed more than 300 students, teachers, and parents, making it the deadliest school disaster in American history. This explosion lead to the use of natural gas odorization.

The London School, located in New London, Texas, was built in 1932 and cost a million dollars to build. It was financed by oil money in one of the wealthiest school districts in the country. It was built using the finest materials and equipment money could buy, including a state-of-the-art shop in the basement. The school was still new at the time of the explosion. It was built on ground that sloped, leaving a large open space beneath the structure. 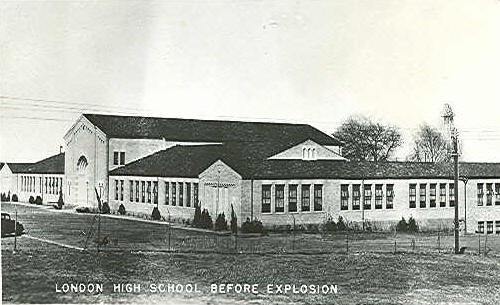 The school board chose to override the original architect’s plans for a boiler and steam distribution system and opted to install 72 gas heaters throughout the building.  Unfortunately, no one knew that a leak had allowed natural gas to slowly accumulate in the basement of the building. When a shop teacher turned on a sander at 3:17 p.m. on March 18, 1937, a spark ignited the gas and caused an explosion that destroyed most of the school, lifting the roof off the building and causing brick, glass, and wood beams to fly through the air as the walls came down. The sheer force of this explosion was heard for miles.

In early 1937, the school board canceled its natural gas contract and tapped into a residue gas line to save money. This step was not exactly authorized but the nearby oil companies turned a blind eye because they deemed the natural gas of no value. The raw gas that had been tapped varied in quality throughout the day. Because natural gas was untreated with odorization in 1937, it had no color and odor, making it almost impossible to detect leaks. 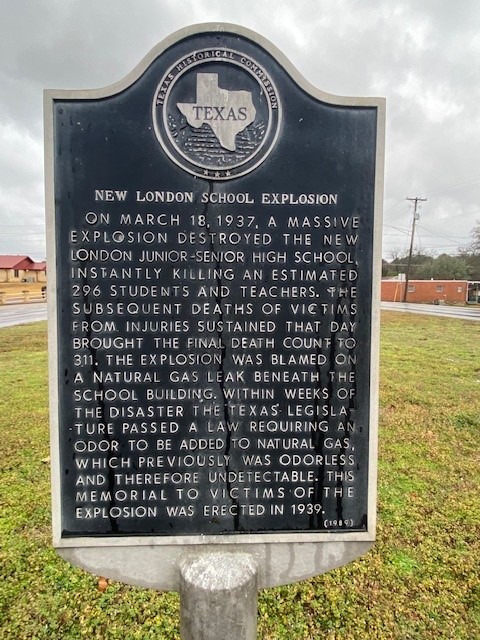 After the explosion, family members and aid swiftly arrived, including Texas Rangers, Highway Patrol, the National Guard, Airmen from Barksdale Field, Deputy Sheriffs, oil field workers, and even Boy Scouts. After a heartbreaking 17 hours, rescuers had the entire site cleared. Amazingly, the surviving gymnasium was quickly converted into multiple classrooms. Inside tents and modified buildings, classes resumed ten days later, with the thirty surviving seniors completing the school year in the gym. A new school was built on the property directly behind the destroyed building.

The Introduction of Mercaptans

The U.S. Bureau of Mines concluded the connection to the residue gas line was faulty, allowing gas to leak into the school. Within weeks of the explosion, the Texas legislature began mandating that mercaptans be added to natural gas, giving leaks a strong detectable odor.  Furthermore, the Texas Engineering Practice Act was enacted, and the practice spread quickly.  A lawsuit was brought against the school district and the Parade Gasoline Company, but the court ruled that neither could be held responsible.

Today, federal regulations mandate the odorization (49 CFR 192.625) of combustible gases so that an individual can detect the odorized gas by its odor. This regulation mandates that, at all times, combustible gases must be detectable at one-fifth of the lower explosive limit by a person with an ordinary sense of smell. Studies showed that odorous chemicals (chemicals that stink) are the best warning agent. Subsequently, companies developed compounds or odorants to inject gas lines to act as a warning means, resulting in natural gas odorization.

To learn more about the New London school disaster, we recommend a visit to the London Museum. The exhibits tell the story of that fateful day in March 1937.  If you’d like to donate to the museum, click here.

Since 1996, Midland Resource Recovery has been a leading source for mercaptan and odorization. The safety of our customers and others is of utmost importance and we take all precautions when providing our products and services.

MRR is dedicated to solving your next odorization challenge. Odorization is what we know best, and we look forward to sharing our knowledge and partnering with you to ensure your project is a lasting success.

No events schedule at this time. Check back soon. 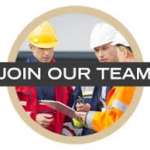